Several Indicators Point to a Challenged Segment, But There’s a Light at the End of the Tunnel

The middle-class lifestyle is becoming more difficult to maintain, impacting homeownership within the median-income group and creating impossible growth standards for entry-level buyers…………..

According to Pew Research, 52 percent of U.S. adults lived in middle-class households in 2016. While the number has remained relatively steady over the years, underlying factors are threatening to disrupt the balance, making middle-class homeownership more difficult to maintain and, for entry-level buyers hoping to grow their wealth, nearly impossible to achieve.

What’s to blame? Experts point to burdensome debt loads, growing income disparities and regular market challenges as the biggest indicators that the middle class could be losing its strength in numbers.

The Market Is Creating Affordability Challenges
Many industry professionals believe housing affordability and tight inventory are the biggest obstacles.

“Middle-class buyers in my market are unable to find homes due to a lack of inventory and increase in market value,” says Jacqueline Balza, broker/salesperson with United Real Estate in New Jersey. “With market values increasing, this holds buyers back because there are barely any homes in their price point to view.”

Matthew Gardner, chief economist for Windermere Real Estate, says there needs to be a “significant increase” in home construction in order to meet demand—a goal he does not believe is realistic with rising construction costs and existing home prices.

Home appreciation has been stronger in the lower-price tier compared to homes sold in the upper-price tier. This can stifle middle-income households.

According to the National Association of REALTORS® metro home price increased 91 percent in the second quarter of 2019.

There really is no median price point anymore. This has impacted many people trying to purchase property as a middle-class buyer because they now have very little to no buying options. When a home does come out in the buyer’s price point, buyers then compete with 10-15 other families who are bidding on the same home. This is driving up home prices and making it extremely hard to get these buyers under contract, let along being able to find them a home they like.

Income Strength Is Weakening
While the national family median income increased to an estimated $78,366, according to NAR, salaries that once supported the middle-class lifestyle have weakened over time. 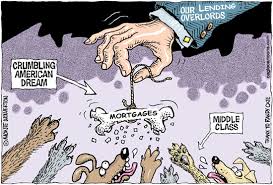 NAR data shows that a buyer putting down 5 percent as a down payment would need to make $62,192 per year in order to purchase a single-family home at the national median price. With 10 percent and 20 percent down payments, the income requirements drop to $58,918 and $52,372, respectively.

Of course, middle-class rankings vary widely depending on location. In more expensive metro areas, such as San Jose and San Francisco, salary requirements for median home prices shoot up to $295,832 and $233,552, even with a 25 percent down payment, according to NAR.

Although there are certainly a number of housing markets across the U.S. that are affordable to middle-income households, they tend to be in areas with weak economies and, therefore, markets where many households do not wish to locate.

Debt Is a Serious Problem
Financial obligations continue to pose a challenge to consumers trying to maintain or achieve a middle-class lifestyle.

According to the Wall Street Journal, the middle class is going deeper in debt in order to maintain their lifestyle. In early 2019, households dedicated 9.9 percent of their disposable income to paying off debts, which include auto loans, student loans and credit card debt.

In the second quarter of this year, total household debt was measure at $13.9 trillion—up by 4.3 percent year-over-year. The biggest obstacle to first-time buyers is certainly student debt loads, which currently stand at $1.48 trillion.”

With high debts and less effective wages, market challenges like a lack of inventory and rising home values could significantly impact middle-class homeownership across the U.S. However, one indicator may be a glimpse of a silver lining ahead.

According to the S&P CoreLogic/Case-Shiller Indices, there’s an overall slowing of home price appreciation, potentially pointing to a balanced market, which could give the middle-class the boost it needs to strengthen and stabilize.